Rooting For a Storm

As twilight closes in, I root for a storm to impose itself on us.  Though I’m terrified of lightning, I will it to come.  There is beauty in the unknown. 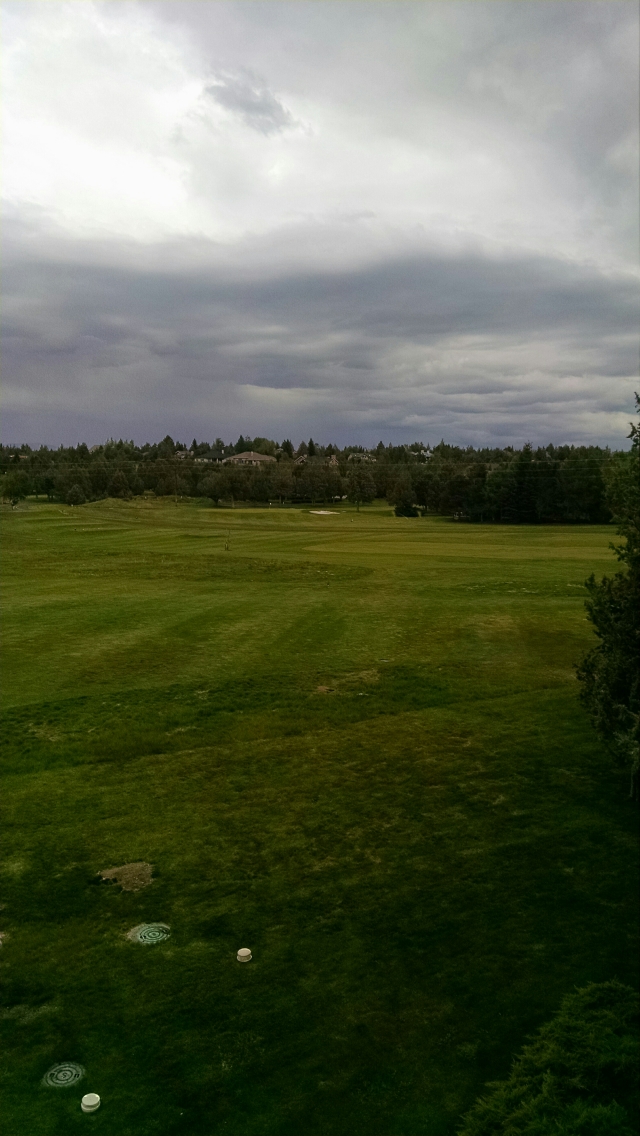 Eagle Crest Resort near Redmond, OR

For as long as I can remember, I’ve been fearful of thunderstorms.  In the beginning, it was the thunder I couldn’t bear.  No matter what the tales the grownups dished out of “angels bowling” or “angels applauding”, I couldn’t handle the loud angry sound of skies tearing open when nearby thunder erupted.

Then, somewhere around the pre-teen age, I realized it was lightning that I should truly fear.  Thunder, as loud as it was, could cause no damage.  Lightning however, well lightning was a force to be reckoned with.  It could cause injury, fire or death.  My parents told of an event at Coney Island, years past, where lightning killed several people.  A friend shared her knowledge of someone ironing and getting zapped to death by a lightning bolt.  And as if stories weren’t enough there were admonishments.

What to do or not do in a thunderstorm.  I’m a resident expert on the subject.  Here’s what I know:  stay inside, don’t be out in the water, don’t be in wide open spaces, don’t hang out under a tree, don’t stand near an open window, don’t talk on a land line, stay in your car if you can, don’t run water, turn off the TV, don’t run appliances . . .

My poor dad.  He was the victim of my safety advisaries.  I hope he understood that I loved him and couldn’t bear the thought of a random lightning bolt finding him on our front porch.  All he wanted to do was savor the storm.  He loved rain, and he enjoyed storms.  I think he mostly ignored me until the storm was really close.  Good for him!

Later on in life, I trembled inside an old tent trying to fold sleeping bags while my two sisters-in-law were hell bent on gathering everything up from outside while lightning flashed savagely close and the thunder pounded and split the ear drums.  I yelled, “take cover!” “it can wait!” Oh but you don’t know my determined sisters-in-law.  There is no such thing as wait.  And me, brave me, inside that tent I crouched low to the ground every time I felt the flash of lightning.  Thunder roared as if cynically deriding us.  That soggy frightful ending of a camping trip in the early nineties will never be forgotten!

Another time, we visited relatives in Idaho.  As the storm ravaged the area, we hunkered down in the hotel restaurant.  Only later did we find out that my husband’s cousin’s house was burnt to a half crisp by a lightning bolt that jolted through by the TV, coursed through the chain link fence, and shocked the cousin. He has lived to tell about it, but I feel the terror of that lightning bolt for him & his family to this day.

And then, in 1996, some other cousins were in a football field at a local Portland area middle school. An eleven year old boy was struck by lightning and needed CPR. It wasn’t as if the kids and adults didn’t take cover during the storm. They did. When the sun came back out, they took the field again to resume practice, and that’s when the boy was struck. Luckily, he was revived.

And after all the stories true or exaggerated, I find myself wishing for thunderstorms, yet fearing them if and when they come. The twilight storm never gathered tonight. I still hope to see one soon. Years ago I vacationed in Tucson, AZ during monsoon season, and was enthralled by the lightning. It’s like lightning I’d never seen before nor since seen! So a little storm would be okay. Really. I can handle it.

Just trying to navigate a life circumvented by chronic migraines. Sometimes I write about managing with those, but at other times I am prone to deviate a bit.
View all posts by andreamarjulie →
This entry was posted in Uncategorized and tagged fear of lightning, storms, thunder. Bookmark the permalink.