Suddenly, I find myself in a parallel universe.  Monkey hats?  Check.  Name tag and daily stickers?  Check.  Classic car?  Not so much.  But as long as it’s motorized and can travel six hours or so a day, we’re good to go.

Myself on left, with my sister in law, Barb, wearing our newbie monkey hats on the first night of the 2015 Cruise Oregon in Pendleton, OR

There are Chevy BelAirs, Mustangs, Metros and Chevelles.  Our friend has been running his green ’58 Edsel for all fifteen of these car cruises (well, there may have been a year or two where he and his wife deviated).  We ourselves coast along in a 2002 Ford F-150 pick-up truck.  Never have had a classic unless you count our 1969 yellow Ford Torino that we only had for nine months or so.

We’re part of Cruise Oregon or Route 26 Cruisers or http://cruiseoregon.com  It’s our first year in what is the Cruisers’ 15th year.  Each time there’s a theme, and this year it’s monkeys, therefore the 2015 Cruise title of  “Monkeying Around”.  There are about seven different groups and our group is the Sock Monkeys.  Others are called Spider Monkeys, Flying Monkeys, Monkey See/Monkey Do and so forth.  Most of the Cruisers are fifty-five years and above, so the idea of stuffed monkeys, stickers, monkey hats and so on might seem more in line with a children’s group.  However, here in the Route 26 Cruisers, you cannot and should not take yourself seriously.

We have to wear monkey hats since we are first timers this year.  Luckily, we only have to don these during group dinners and drivers’ meetings.  Really,  it’s hard enough to remember to put on our name tags!  These Cruisers have a sheriff, deputy, mayor and judge who will fine you if you’re caught without the required attire.  But it’s all good.  The money goes to charity.  We had a good laugh when a woman was fined for being caught at some remote Idaho rest stop – using the men’s room!!!  She was caught on camera and she and her sentry were fined accordingly.  It’s fun watching perpetrators try to wriggle their way out of their ” caught in the act”.  They always end up paying!

So we tour Idaho and travel along with the kinship of this car club.  It’s been different and interesting, while at the same time a bit long and taxing for a migraineur and her husband who can barely walk with bad, bone on bone knees.  We prefer a sit and stay awhile rather than pack up, go and travel for six to eight hours and do it again the next day.  But I’m glad for the experience, and happy to have met some good people along the way.

We are capping off the last two nights in Idaho in a very bustling city of Boise.  Last time I came here, in 1983, it was just a small city.  How times have changed!  We saw one of those peddling buses where people drink and peddle.  Loved it.  We had great hospitality at a Westside Drive-In.  More adventures to come in the final few days.  It’s been tiring for sure, but the memories will last forever.

Post Falls, ID – near Coeur d’Alene.  This was our view from the Templin Red Lion. 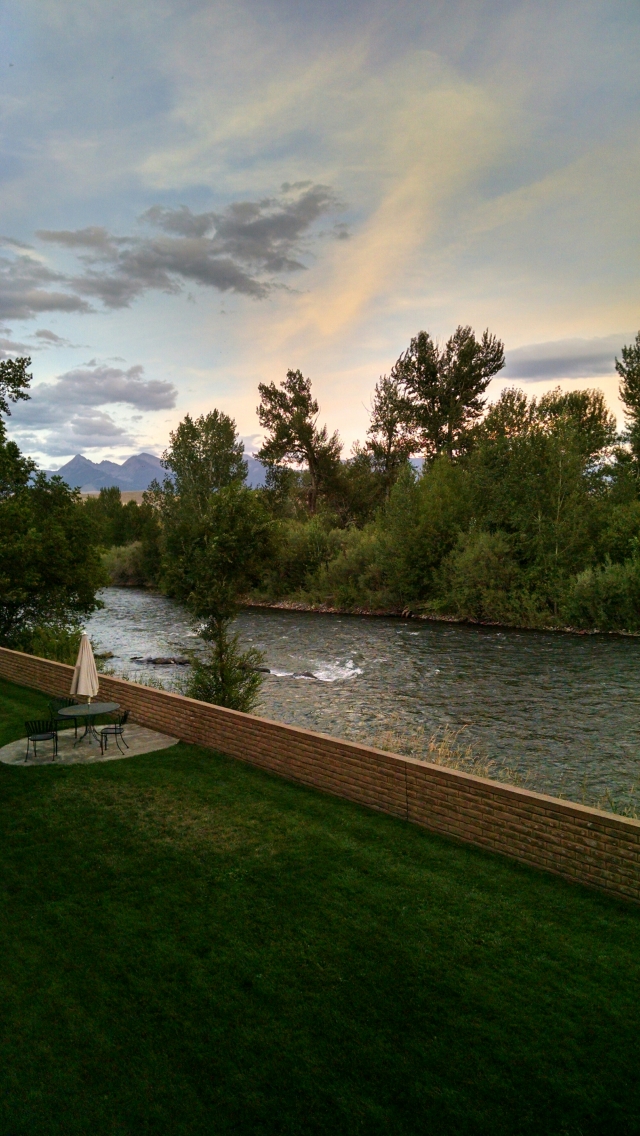 A 9:30pm view from the Stage Coach Inn  of the Salmon River in historic Salmon, ID (where Lewis & Clark met Sacajawea)

Just trying to navigate a life circumvented by chronic migraines. Sometimes I write about managing with those, but at other times I am prone to deviate a bit.
View all posts by andreamarjulie →
This entry was posted in Uncategorized and tagged Boise, car clubs, cruise Oregon, fun, Idaho. Bookmark the permalink.