That special day in August unfolded like someone else’s storybook pages.  A fairytale wedding evolved in which I played the role of mother of the bride or MOB in today’s acronym shorthand.  My little girl with the Minnie Mouse backpack who took her first flight of freedom from me as a kindergartner had now turned into a grown woman.  Together with her wonderful groom, Jana and Josh orchestrated a perfect day, and it was filled with love and beauty.  It was not only their love but the love of others for them which made everything extra special. 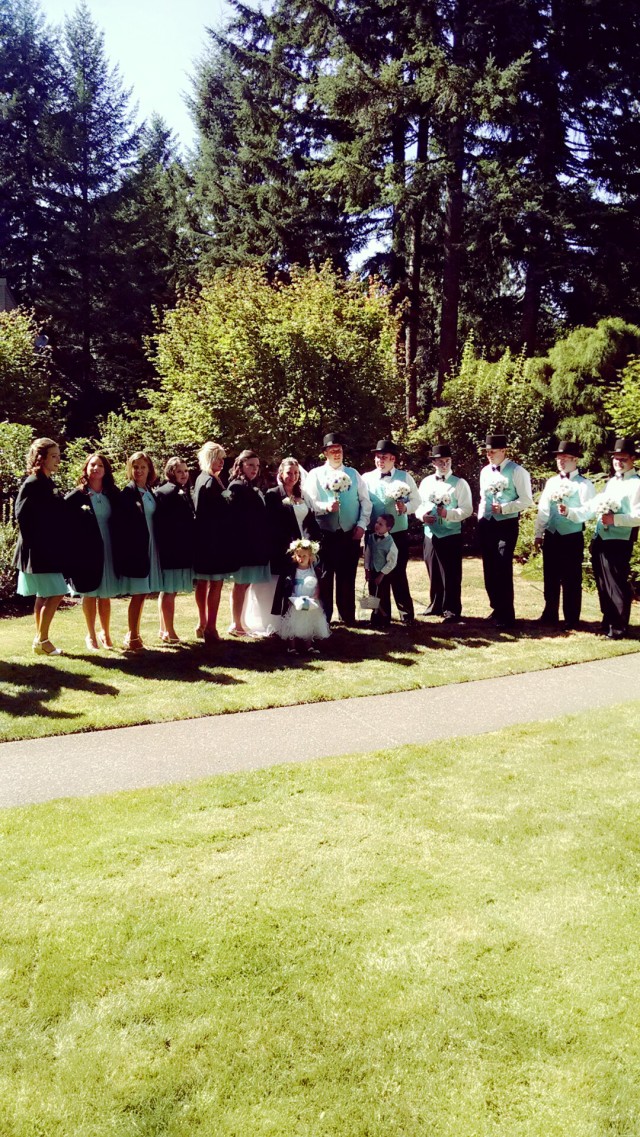 From the top hats and canes of the groom and groomsmen to the Tiffany blue swishes of the bridesmaids’ dresses, everything radiated.  The bride, my daughter, amazed me with who she had grown to become as if she was perfecting herself for this day.  Her princess bridal gown dazzled as she walked with her father up the aisle in the last steps of singlehood to be joined with her regal knight in matrimony.

Cousins came together in an extra special way.  AJ (Allen) who is seven years older than Jana also is a friend of Josh’s and works with him. Angela once held Jana close in her two and a half year old arms when Jana wasn’t even a full day old.  On this August day in 2014, as maid of honor, Angela put on a most memorable toast with singing and entertainment in special words sung in vogue to the tune of “Bohemian Rhapsody”.  Amazing!  Casey, three months younger than Jana, officiated the wedding.  He did a great job.  Who knew that the two baby cousins playing on the carpet side by side would one day have this special bond?

Josh’s daughter caused my tears to start flowing.  She looked so sweet and so grown up as a junior bridesmaid leading off the procession. Then there was my son Tim, walking up the aisle with his beautiful girlfriend, Ashley.  More pride and joy swelled out of my heart at the sight of them. Josh, so handsome in his tux as he stood waiting for my daughter, teared up and only made me cry more.  And then there was the moment we rehearsed where we all hugged and watched Jana join Josh to be married.

There was so much joy and there were many surprises.  The bride and groom danced to “Thriller” in a way that captivated the audience.  When their attendants came out and joined them, it was like watching a dance show on television.  I danced like a fool later on and had such a fun time (my head was tamed with triptans!)

I still can’t get over how well everything went.  It was more than just the wedding itself though.  I believe it was the love of family and friends which made the whole event blossom brightly.   To all who gave of themselves to make this day truly memorable – thank you so much.  Seeing the love that you had for the bride and groom is a special kind of gift in and of itself.

Disclaimer:  I am fully responsible for any excessive bragging in this post.  Call it a mother’s prerogative.

Just trying to navigate a life circumvented by chronic migraines. Sometimes I write about managing with those, but at other times I am prone to deviate a bit.
View all posts by andreamarjulie →
This entry was posted in Uncategorized and tagged bride, groom, maid of honor, mother of the bride, wedding day. Bookmark the permalink.